Pippa Franks lives in Warwickshire with her husband and rescue dog, Bailey.

Although her real name is Cheryl Henderson, she wanted to write under the name Pippa Franks in her mum’s memory. She’s known to her family as ‘Cheryl the Peril.’ This confuses her. It’s not as if she’s clumsy or accident prone, or anything…

Pippa started writing this book almost ten years ago and then life got in the way. But she never forgot the characters and their story. She’s delighted to be able to introduce them to you at last. 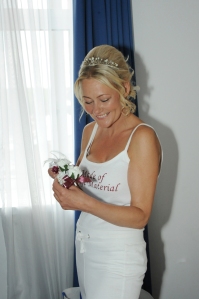 – Who are you, Cheryl Henderson or Pippa Franks?

“My real name is Cheryl Henderson, but I wanted to write under the name Pippa Franks in memory of my mum. She was ‘Pip’ Franks. I hope this doesn’t confuse people.”

–  How did you decide to pursue a writing career?

“The idea of writing a novel began many years ago when I was ‘helping’ my daughter with some uni work. I told her jokingly that I was going to write something.

This is how the conversation went:

Me: I’m off to write something myself now.

Daughter: What’s it going to be about, and what will the main character be called?

Me: I dunno, but the character will be called erm, Olivia.

I could tell she thought I was going to need it, but I wish I had a picture of her face two hours later when I showed her chapter one! It was terrible, of course. It was one thing wanting to write, but another thing entirely, knowing how to. But over the course of ten years I’ve improved (I hope) enough to finally publish Olivia’s story, now called ‘The OMG Test.’

– Has the process of getting to this point been hard?

“Definitely! There’s been blood (well, my fingers have felt as if they’re bleeding from all the typing) Sweat (not very glamorous, I know) and tears (plenty of)

I sent off agent submissions at different times, all to no avail. I did get some positive feedback though. There’s many more options for writers though, in this day and age. Self-publishing isn’t frowned upon as it was years ago.”

–  Are the characters based on people you know?

“No, but my family beg to differ! Olivia is clumsy and accident prone. All I will say is that they call me ‘Cheryl the Peril’.”

–  What genre are you writing in?

“Chick-lit/romantic comedy. This is where my heart is. I do, however, touch on important issues along with the fun and farce. This will be the case in every book I write.”

“I’m writing my second book, ‘The 7th Day of May.’ It’s paranormal. I aim to get the first draft completed about the same time as I publish book one.”

“To publish the first two books in 2015 and to have started my third.”

Pippa would love to hear from readers, through any of the following contacts: