Author D.E. Haggerty celebrates the release of her new book Jack Gets His Man and today I have the pleasure to have a little chat with her about books, surfing and Gray-Haired Knitting Detectives!

But first things first, THE BOOK:

Book title: Jack Gets His Man 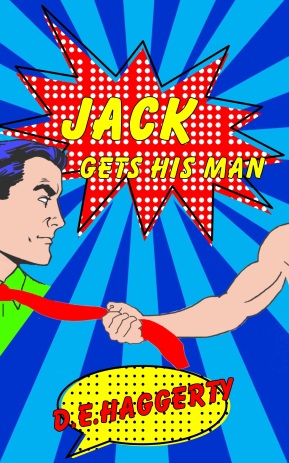 Jack’s life is awesome. His store is making money hand over fist and his best friend has found love. So what if he’s feeling a bit restless and put out about his upcoming birthday and his ex is being a pain in his fabulous behind? That’s nothing he can’t handle. But then his smoking hot new bookkeeper discovers things at the store aren’t actually as they seem. Someone is playing fast and loose with the finances. Jack’s bestie and his gal pals, the gray-haired knitting detectives, jump at the chance to solve Jack’s problems. When they aren’t re-enacting scenes from spy thrillers, they’re setting Jack up on dates and generally insinuating themselves into his love life. They’re determined to find love for Jack as well as his missing money. Will Jack catch a thief or find love? Either way Jack’s going to get his man.

“I was born and raised in Wisconsin, but think I’m a European. After spending my senior year of high school in Germany, I developed a bad case of wanderlust that is yet to be cured. My flying Dutch husband and I have lived in Virginia, Ohio, Wisconsin, the Netherlands, Germany and now Istanbul. We still haven’t decided if we want to settle down somewhere – let alone where. I’m leaning towards somewhere I can learn to surf even though the hubby thinks that’s a less than sound way to decide where to live. Although I’ve been a military policewoman, a commercial lawyer, and a B&B owner, I think with writing I may have finally figured out what I want to be when I grow up. That’s assuming I ever grow up, of course. Between playing tennis, running much slower than I would like, trying to adopt every stray dog within a 5-mile radius, traveling to exotic new locales, singing off tune, drinking entirely too many adult beverages, addictively watching new movies and reading books like they are going out of style, I write articles for a local expat magazine and various websites, review other indie authors’ books, write a blog about whatever comes to mind and am working on my sixth book.”

“I tried everything else out and writing was the only thing left? But seriously, I’ve always been writing stories, poems, songs, etc. I wrote my first book on a school bus when I was in 6th grade. I’ve converted my Bed & Breakfast into a group rental and so now I have the time to write.”

“I’m self-published so no. A lot of companies try to make self-publishing sound more difficult than it is so that they can make money off of new writers, but it’s just a matter of doing your research. Formatting is boring but it’s not difficult.”

“Everyone assumes that, don’t they? When I started writing, I was definitely ‘borrowing’ characters from real life. The more I write the easier it is to develop characters that are entirely unique (at least I hope so!).”

“Jack Gets His Man is a romantic comedy (M/M) with a side of mystery. It’s the second book in my Gray-Haired Knitting Detectives series. The series will consist of three books – unless I get caught up in a new character who I thinks deserves his or her own book.”

“That’s like trying to pick a favorite child! Each book is a favorite for a different reason. Jack Gets His Man is a favorite because I overcame my fears of writing the novel from the perspective of a gay man.”

“I have three books in the works. In the first place, I want to finish the Gray-Haired Knitting Detectives series with the third book. It will be the toughest case the ladies have to solve as one of their own is accused of murder. I’m also working on a spy/romance set in Istanbul during World War II as I’m living in Istanbul at the moment and I’m a total history geek. I also want to write a sequel to Life Discarded in which I explain what happens to a woman after she throws her life away (which is what the heroine did in the Life Discarded).”

“Besides working on the three books I mentioned, I’m trying hard to give my personal blog more attention and improving my Readsalot blog (a blog to market indie writers). On a personal level, my husband and I are researching where we will be heading after November when his contract in Istanbul expires. I’m pushing Australia as I’m dying to learn to surf before I’m too old (although that ship may have already sailed).”