T. Mike McCurley lives in a suburb of Oklahoma City, occasionally banging out superhero prose on a battered laptop.

His stories of the ‘Emergence’ – a worldwide explosion of metahumanity beginning in 1963 with a scared little girl – were first published online in 2004. From them came the character of Francis Drake, an Emerged cop born in the form of a humanoid dragon. The stories of ‘Firedrake’ first saw light online in 2008 and spanned numerous chapters, eventually becoming a series of books.

The Adventures of Jericho Sims stem from long-ago discussions  and have at last seen the light of day!

Jericho Sims is a cursed gunslinger in a wandering search across the American Old West as he seeks the demonic doctor who killed his comrades. Paranormal and supernatural events and creatures assail him on all fronts, and Jericho finds himself drawn deeper and deeper into a world he never knew existed.

T. Mike McCurley’s smaller, unaffiliated short stories have been published on various sites, and some of them are now available for perusal at www.tmikemccurley.com.

T. Mike McCurley did me the honor of visiting my blog and the result was one of the most entertaining interviews ‘A Book And A Cup Of Coffee’ has ever hosted. 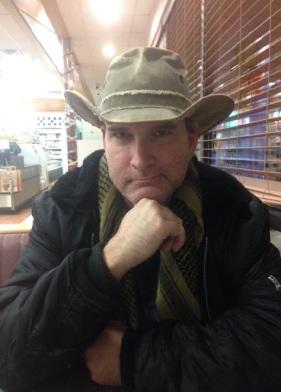 “I’m pretty much the guy next door. The one with a head full of weird ideas about how things should be as opposed to how they really are, and a desire to set down on paper the crazy things that run through my head on a daily basis. I chase dreams, and sometimes I catch them.”

“I’ve always written stories of one stripe or another. All through school and on through the years since. One day I stumbled across a website offering superhero stories, and I decided to try my hand at submitting a few. That was my breakthrough into the superhero genre. The short stories I put together for that site became the backbone of my Emergence world (soon to be the default superhero setting for Lester Smith’s D6xD6 roleplaying game!). My Firedrake stories were a direct result of the Emergence tales. At the same time, my serial of post-apocalyptic survival, “Skyfall” (written under the pseudonym Jujen Kai), was making the rounds of the survival sites one chapter at a time. I have an eclectic group of stories. One of the only things that ties the vast majority of my stuff together is action.”

“For the most part no. Remember, though: I write about cursed gunfighters and seven-foot tall humanoid dragons. There are a few attributes here and there that come from someone, but they get dropped into the blender of character creation and slapped down as just a part of the overall product. Elements of appearance – a hairstyle, perhaps – or a manner of speaking that sparks an image in my mind when I craft the character are not out of the question. But as to, “Hey that guy sounds just like Fred,” or similar? Nope. Unless you see yourself as my hero, in which case I encourage you to keep visualizing. The world needs more of that!”

“Firedrake definitely falls into the superhero genre. I have several short stories that also fit neatly in there. Jericho Sims is more of a science fiction/supernatural Western. I like to describe him as “Josey Wales meets Carl Kolchak” — a gunfighter who encounters elements of the paranormal that no one else seems to come across.”

“This is where I am supposed to discuss how I sit down at my immaculate desk and everything is perfect. Not so much. I generally grab my laptop and literally put it on my lap. I put on some music and try to make sense of the myriad images rolling about in my head. I’m not one of those, “Every morning from six until seven-fifteen I write” kind of folk. I write what I can when I get the chance. I have a notebook and/or journal with me pretty much all the time for scribbling down random thoughts, and my phone is full of recorded messages to myself that I try to remember to transcribe. I’m kind of jumbled and piecemeal.”

“Well, I just released Book 2 in the Adeventures of Jericho Sims. “Buried Treasure” sees Jericho in a race across Oklahoma Territory as he tries to recover a Native artifact before the creature it controls manages to stop him…the hard way.

I have another two Jericho short stories in the works, in various stages of first draft, and about seventy-five percent of the first novel, “Jericho’s Gold”, has been drafted. I’m also working on the next Firedrake release, a novel titled “Inquisition”, where the sinister Inquisitor finally makes himself known and begins a series of attacks on metahumans everywhere. A multi-part story of assassination and crime in the Anthills of Tulsa is also underway for Protodimension magazine, soon to be released in serial format.”

“The sky is the limit! It’s my intent to drop a few more Jericho Sims stories while I work on the novel. Let people come to know the man and follow his story. The short stories are litle snacks, and then the novel will be a full meal for fans. There are two additional Firedrake novels on the horizon as well, so folks who like the big guy can relax. I haven’t shelved him!

Rest assured, folks, that I am just getting started. What you see now is but a sample of what is to come.

Thanks for having me here for the interview. Y’all stay groovy.”